They see a lot of documents at the Buncombe County Register of Deeds office, a veritable avalanche of paperwork on some days.

“We do a lot, especially at the end of the month,” said June Ingle, a deputy register of deeds who’s been with the office three years. “On Friday (a week ago) — now this was not specifically just deeds — we did over 350 pages in hour and a half time.”

That was Ingle and one other deputy handling those documents.

In 2017, the Register of Deeds Office recorded 45,918 documents, ranging from death certificates to land transactions.

So, you could understand if Ingle got covered up in paperwork and didn’t pay particularly close attention to one of the dozens of deeds that can come across her desk every day. But one warranty deed for a vacant lot transfer that came in a few weeks back looked just a little, well, off.

It lacked an excise tax, the fee usually paid when property is transferred, and the money order that accompanied the paperwork was left blank and didn’t have the buyer’s name on it. The Register of Deeds office doesn’t accept blank checks or money orders.

The property in question was small, just 0.19 of an acre, but it’s in Montford and has an assessed value of $207,000. Yet the deed, typed and formatted like many other regular deeds, indicated no transfer of funds.

Also, the money order and package had come from a “Larry Stephens” in Stockbridge, Georgia, the person receiving the property was supposedly in Rancho Cucamonga, California, and the alleged seller was in Boston.

In short, red flags were flying for Ingle, who has her degree in criminal justice. 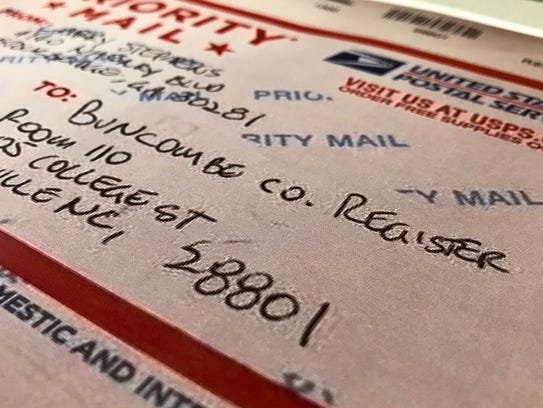 One of the red flags in an attempt to fraudulently transfer land was this mail slip, which came from Georgia. (Photo: John Boyle/[email protected])

So, she took it to her supervisor and then did some Googling of the supposed recipient of the land. She came up empty.

“I found an address of the local attorney listed (on the deed), and I said to my supervisor, ‘Will you contact the attorney?’,” Ingle recalled.

That local attorney, Joe Ferikes, is a pretty well-known guy, having been the town attorney for Woodfin for decades. He’d never heard of the people named on the deed and said his office had nothing to do with it.

“The lady left me a message on phone: ‘Are you trying to sell your lot? Because I just got the paperwork to transfer the deed, and it just seems kind of fishy,'” said Crosby, a divinity student at Harvard who happened to be in Asheville on her spring break when the office called. “I knew nothing about it. I had never put it on the market.”

This being a hot real estate market, Crosby, 43, said she occasionally hears from someone interested in buying the lot, but she plans on keeping it as a possible retirement spot. She bought the property in 2009, and visits town on occasion, as her parents still live here.

When Crosby came by the register’s office to look at the paperwork, she was amazed at the lengths the crook went to.

“Somebody had forged notary papers in Boston, where I live, and they’d forged my signature and the witness’ signature, and they’d faked a letter from a local attorney in Asheville,” Crosby said. “They were paying the Register of Deeds to transfer it, and she noticed the paperwork just looked fishy. She was really amazing.” 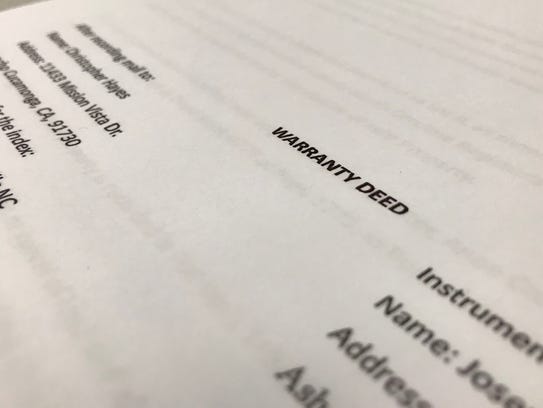 A sharp-eyed deputy register of deeds saw several red flags related to this fraudulent deed submitted to the office in an attempt to steal land. (Photo: John Boyle/[email protected])

Buncombe County Register of Deeds Drew Reisinger said this is the first attempted land theft by fake deed he’s seen in his seven years, but he has heard of the scam taking place in other places across the country. He contacted the Asheville Police Department, and it suggested he reach out to the states’ others registers of deeds to see if they’d encountered the ruse.

“After we sent out a mass email to other registers of deeds across the state, we got immediate hits from other counties,” Reisinger said, noting that fake deeds were actually filed in Wake County and New Hanover, and Currituck County had four fake deed attempts.

Reisinger says it’s unclear if the fake deeds are the work of an individual or an organized ring. While the deeds have some holes in them, they’re pretty convincing in many ways.

“This has gotten through in most other counties,” Reisinger said. “June did a really impressive job of catching this and not letting it go on file.”

“I have heard of it going on in other parts of the country,” Ferikes said. “Thank goodness they’re catching these folks. I’m really glad the Register of Deeds was on top of it.”

Had the deed gone through, at a minimum Crosby would have been looking at a legal nightmare lasting months if not years. A property owner caught in this scam would have to “absolutely prove they did not initiate the original deed that went through,” Ferikes said.

“I think she dodged a bullet here because, through no fault of her own, this would have cost her a lot of money,” Ferikes said.

“What we’ve seen in North Carolina is this group or this person is consistently going after vacant lots,” Reisinger said. “Ann would have never known about this until it came time to pay taxes, and then she wouldn’t have gotten a tax bill. And would she have asked the county to send a tax bill? I’m not sure I would have.”

Reisinger said they’re unsure how exactly the criminal was looking to profit in this case. In Wake County, a man who pulled a similar scheme was convicted in federal court in late March of bank fraud, engaging in monetary transactions involving criminally derived property and aggravated identity theft.

The jury in that case said the criminal, a 30-year-old Greensboro man, also had to forfeit more than $1.3 million in fraudulent proceeds, as well as $300,000 in gold bullion.

A press release from the U.S. Attorney’s Office detailed a convoluted scheme in which “the defendant forged a deed on a property owned by an out of state landowner, and then channeled the property ownership through fictitious individuals and a holding company before personally taking title to the property. The defendant then attempted to secure $495,000 in home equity loans using the property as collateral, becoming successful on three such attempts.”

The local police have referred the Crosby case to the North Carolina Attorney General’s Office.

Ingle, her criminal justice degree itching a bit, would like to investigate the perp herself, if she had the time and resources.

“I feel good for Anne Crosby, ’cause that’d pissed me off if I’d found out,” Ingle said with a laugh. “It made me mad to think there’s more people out there like this.”

Crosby, who used to live in Santa Clara County in California, says she was really grateful Ingle was on the job.

“Having lived in California, I don’t know if a big county like Santa Clara would catch it,” Crosby said. 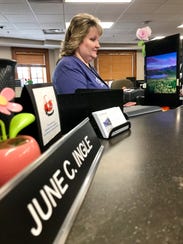 June Ingle, a deputy register of deeds, has worked in the office for three years. She recently caught an attempt to fraudulently transfer land. (Photo: John Boyle/[email protected])

While the Register of Deeds Office gets a lot of what Ingle calls “homemade deeds,” created and written by the property owners without an attorney’s assistance, she and Reisinger, and naturally Ferikes, all recommend using an attorney who specializes in real estate.

Reisinger wants to assure people that while so many records are online these days, including property ownership and taxes, their documents are safe.

Crosby said she’ll be keeping a much closer eye on her property online. She’s taking away two lessons from the whole deal.

“One, it was creepy because this person went to all this trouble to fabricate documents,” Crosby said. “It showed a real dedication. The second thing — and I was kind of knowing this already having worked in Silicon Valley in tech — is this publicly available database. Anybody can go on and find somebody who owns vacant property and try this.”

Obviously, public documents need to be public, but Crosby wants to see more safeguards so this doesn’t happen again.

Reisinger said the Register of Deeds is doing just that. It has initiated a program called “Property Check” to provide another level of security.

The idea is that once you sign up for the program, if anything is recorded in your name, you’ll get an automatic email directing you to a page online where you can see what’s going on. For more information on Property Check, visit www.buncombecounty.org/propertycheck or call 828-250-4303.

“The difference with this Property Check is if something were to transfer, you would get an immediate notification, which is helpful,” Reisinger said.

In this case, Reisinger is just glad Ingle was on the job.

“The lengths that June went to to help this citizen not lose a valuable piece of property, or at least not get tied up in legal shenanigans and lawyer’s fees, was above and beyond,” Reisinger said.

Ingle is pretty humble about the whole deal, and she’s glad no one got swindled.

“This was like the perfect storm right here to be able to catch it and not let it get recorded,” Ingle said. 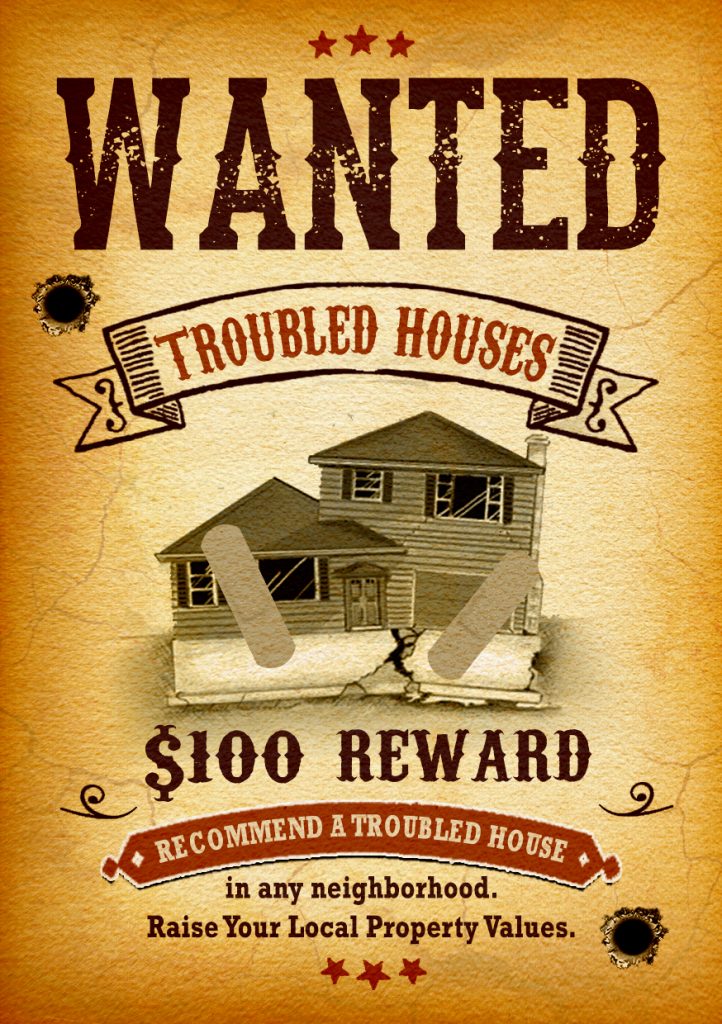